in Where Are They Now? , 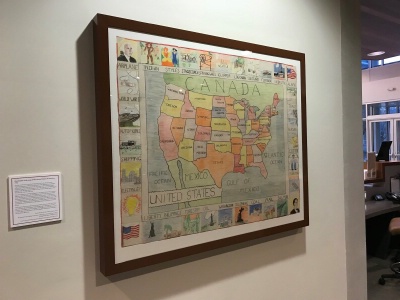 A speedy conservation is as great as a speedy recovery, if not better. In 2016, the MacArthur Memorial nominated a 1941 cloth map of the United States to compete as one of Virginia’s Top 10 Endangered Artifacts.

The map was created by Helen Angeny, a missionary and art teacher, working in the Philippines at Brent School in Baguio. In December of 1941, Japanese forces invaded the Philippines. After the invasion, Helen Angeny ended up becoming an intern in a Japanese-controlled camp. Mrs. Angeny was forbidden to teach any subject matter of western influence. However, she did not allow that to stop her from enlightening her students with a diverse education. Angeny wanted to educate her students while also keeping their spirits up by providing a distraction from their imprisonment. She secretly created a class project to teach her students the principles of art, social studies, and geography by creating a cloth map of the United States. The camp was liberated in 1945 by General Douglas MacArthur’s forces. When she returned to the United States, Angeny brought home the map that she concealed for three years from Japanese forces.

The cloth map received the nomination and was named one of Virginia’s Top 10 Endangered Artifacts. Two months after receiving recognition in September of 2016, the U.S. Cloth Map has since been conserved. The map is now on exhibition and looks as good as new.

I had the wonderful opportunity to speak with MacArthur Memorial curator, Corey Thornton to learn more about the map’s conservation process. The map’s previous state showed signs of fading, wear-and-tear, and displayed pieces of cards coming away from the cloth. The goal of the MacArthur Memorial was to be able to conserve and stabilize the map and have it placed in an ideal archival encasement to protect it but also still be able to use it as a tool to educate future generations.

Thornton walked me through the conservation process done by Textile Preservation and Associations (TPA). The goal was to stabilize and restore the cloth back to its original glory. The first step in the stabilization process was to vacuum clean both sides of the cloth map to remove airborne particles. Next, the fabrics, sewing threads, and adhesives were tested for color-fastness and solubility. In addition, stains on the cloth were tested for solubility as well. The map was then humidified by misting distilled water onto the cloth. The misting was meant to relax the fabrics to remove the creases and release soluble components to reduce soiling. The map was blotted with paper towels to remove excess water which allows the fibers to align. A layer of paper toweling was left in place on the map to act as an absorption layer for the release of soluble components. The map was then covered with glass weights and allowed to air dry. The final step of the stabilization process was to re-adhere the photos. Using starch, the loose paper cards were reattached to the cloth. In preparation for exhibition, the cloth had to undergo specific steps to sustain the longevity of the artifact. A buffered, acid-free panel was prepared and covered with non-woven polyester batting and a previously washed, unbleached, fine cotton fabric. Following that, the map was attached to the padded panel with one row of stitching across the top using an appropriately colored silk thread, and then photographed on the panel. Next, an ultraviolet filtering glazing was laid over the map, applying a light pressure to the fabric for protection. The entire unit was placed in a custom-made frame with an aluminum back for support and an outer frame of plain angle aluminum with a 2" by 3" powder coated brown covering, requested by the MacArthur Memorial. Lastly, the map was packaged in bubble wrap for transit back to the museum. In this case, Thornton picked up the piece from TPA along with MacArthur Museum attendant, Emery Odango on October 19, 2017.

We at VAM are thrilled with this successful conservation story, and are excited for more to come. Thank you, Corey Thornton, for providing insight on the U.S. Map Cloth’s conservation process. The map is only on display until May 2018, so be sure to stop by to see and discover the story of the U.S. Cloth Map.

In this video from Norfolk TV-48, you can learn more about the map and the MacArthur Memorial’s conservation plans:

Bringing History to Life Through Innovative TechnologyMarch 27, 2018 The Spring/Summer 2017 VAM Voice is HereJune 1, 2017